Who I am, and why I write

Welcome! My name is Erin Manning, and I write clean Young Adult fiction for ages 12 and up. I'm an avid reader and I've been...

A Smijj of Hope is now available! 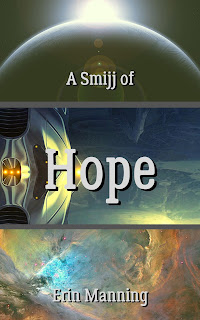 I'm pleased to announce that the tenth and final book in my Tales of Telmaja sci-fi series, A Smijj of Hope, is now available for sale! Click the links below to see the book:

A word about pricing: as long-time readers know, I try to keep the prices of both my print books and ebooks as low as possible. This time, I had to increase the price of the paperback to $15.99 (US) only because A Smijj of Hope is the longest book I've ever published, at nearly 400 pages, and that affects the printing prices. In order to be able to list the book for sale internationally I have to follow Amazon's pricing guidelines, so I won't accidentally offer the book at a loss in any market. As always, though, the ebook is $2.99, and I have enrolled the ebook in Kindle Unlimited so that KU users can read it for free.

This has been a long journey. I wrote the first draft of what would eventually be the first book in the series, The Telmaj, during my first National Novel Writing Month experience back in 2006. It took me six more years to decide to try self-publishing it, and I published The Telmaj in the fall of 2012. Eight years, nine more books, and thousands of words later, Smijj has finished his story of adventure. In the meantime I've published four books in a second series and one stand-alone novel, making A Smijj of Hope my fifteenth published book.

I am deeply grateful to all of my readers who have let me know how much they've enjoyed these stories! I've got more clean young adult science fiction on the way, as well as the last book in the Adventures of Ordinary Sam and the first book in a new fantasy/magic series coming soon. Thank you for reading!

Editing is for everyone

As I continue the final editing process for A Smijj of Hope, I thought this might be a good time to share a little bit about what it's like to edit a book as an indie writer.

Every indie/self-published writer is different, and everyone's editing process will vary, but for me editing has three distinct stages: the initial editing stage, the middle stage, and the final stage.

The initial editing stage ideally takes place not too long after I've written the last word of the last chapter of my work-in-progress. While it's a good idea to wait just a little while, I have found over the years that a quick read-through soon after finishing the first draft is a good way to catch really obvious typos as well as note any glaring contiunity areas or places that simply need work. In the initial phase, I might take some notes about these things, but I'm not usually ready to dive in and make those major changes.

The middle phase of editing is where the heavy work gets done. I've read my WIP (work in progress) a time or three, and I've cleaned up some things, but now is when I ask the tough questions: does this scene make sense? Would it make more sense someplace else in the chapter? Do the chapters seem wildly uneven? Does the dialog sound too forced, or is it, on the other hand, so colloquial that it sounds more like bad English than like ordinary speech? This is the part of the editing process where whole scenes might get deleted and, sometimes, new ones added in to make things run smoothly. The amount of work will vary wildly from book to book; on one occasion already I kept going over a new character introduction uneasily until I finally realized that the character I had imagined just did not work. I erased her entirely and replaced her with a much more dynamic character who went on to become one of the more prominent characters in the remainder of the series.

Finally, I reach a state where I'm more or less happy with the manuscript, and that's where the final edit comes in. At this point, since I'm self-publishing, I have already begun the uploads of title information, description, cover and so on that will go ont he finished product; now it's time to upload the best version of the WIP so far. Almost done, right? Well...

In one sense, begining the final edit means I'm much closer to the end of this book's journey, but in another, I go into the final edit expecting a minimum of two more times of reading the book. First, when I've uploaded the file, I'm given options to order a printed proof copy, generate a digital proof, or both. For years I've ordered printed proofs, but in the present stage of the pandemic I decided to see how things would go with a digital copy. If this was not my fifteenth book I don't know if I would have tried it this way.

Once I get that proof copy, in whatever format, I need to read through the whole thing slowly and carefully. I just finished that first step, and I found over 40 things I wanted to change in an almost-400 page book. That's not that bad, though I know some new writers find that reality a little daunting.

Some of the changes were purely optional: a word choice that didn't sound quite right, or a sentence that seemed clunky, and that sort of thing. But I had actual errors among that list of forty, things it was worth it to change.

I made my changes and uploaded a new file tonight. Immediately I noticed that the initial pages in the title page section (the part where you have the title page, the list of other books in the series, the standard disclaimer, the publishing date and ISBN, etc.) had an error: an extra blank page had thrown off the whole manuscript so that the book text started on a left-hand page instead of a right-hand one. This is not a good thing for most books; I had to upload a new file right away.

Next, I will read through the whole book again, making sure all my changes were made correctly and no new errors are present. If necessary, I will make more changes and generate another proof before completing the book setup.

As you might have guessed, all of this ends up requiring many, many readings of a WIP by its author before the book gets published. If I'm lucky, I can line up a beta reader or two as well to help me find mistakes and give advice and feedback.

How does this process differ from traditional publishing? That depends in part on if you're writing under contract for a Big 5 publishing company or just an average person who is hoping to find an agent and make it in this difficult world. For the former writer, professional editors will be present at every stage of the writing process, but for the latter--and for most writers--you will do every single thing I've already said minus only the book setup parts (cover, etc.) before submitting your manuscript to a reputable literary agent.

Some new writers will make the mistake of thinking that getting an agent and a publisher means you get to skip most of this process; that is, you just write the first draft, and then professionals tell you what to do with it from that point on. It really isn't true, though. To be a good writer, whether you're an indie or a traditionally-published author or a mix of both, you have to learn how to move through these stages of editing and make your book the best it can possibly be.

I realize this blog has been sadly neglected; I still haven't quite figured out how to use it properly.

But I'm excited to let everybody know that I am now in the final editing stages of A Smijj of Hope, and if all goes well it should be available for sale by the end of May.

Readers: I love to hear from you!

Erin Manning
Welcome! I’m an opinionated redheaded Catholic writer of clean Young Adult fiction (if my books were movies they’d be rated PG, but not PG-13 or R). I have published a ten-book science fiction series, a standalone book featuring mermaids and vampires, and a five-book fantasy/magic series. More books are coming soon! Occasionally I blog about matters of faith and culture, especially because, as Mason Cooley put it, "Writing about an idea frees me of it. Thinking about it is a circle of repetitions."